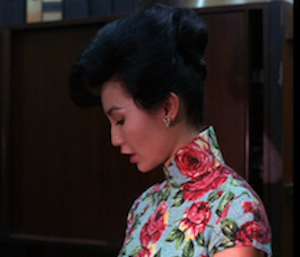 Wong Kar-wai’s dazzingly beautiful cult classic In the Mood for Love illustrates the natural affinity between exoticism and nostalgia. Tony Rayns (2015) describes it as a ‘requiem for a lost (colonial) time and its values’, while Vivian Lee (2009) sees it as part of the ‘nostalgia fever’ that seized Hong Kong  from the late 1980s throughout the 1990s.

The narrative is set in the 1960s amongst the Shanghainese diaspora, who live cheek-by-jowl in multi-occupancy rooming apartments in Hong Kong. This is where Chow Mo-Wan (Tony Leung Chiu-Wai) and Mrs Chan, née Su Lizhen (Maggie Cheung), meet. When they discover that their respective spouses are having an affair, they spend more and more time together and eventually fall in love with each other. Yet determined not to be like their unfaithful spouses, they ostensibly never consummate their love.